Earlier this year, a Real Estate and Facilities (RE&F) team with a Microsoft subsidiary used Bing Maps Distance Matrix API, as the specialty tool to perform a quick commute analysis, to help determine the single best location for collocating all of their operations from multiple offices in a metro area (hereafter referred to as “Region X”) to one office location.

“As we were in process of collocating a new site, finding the right location for our colleagues was essential. We wanted to make it more accessible and to have a better commute for all our staff. Using the Bing Maps Distance Matrix API, we were able to quickly determine with HIGH ACCURACY where they live, what is the commute time currently, and what will be the commute time to the proposed locations. GREAT HELP in narrowing the options.  Therefore, GREAT TOOL with GREAT RESULTS,” said RE&F team Facilities Operations Manager.

In this blog post we share in detail how the RE&F team used the Bing Maps Distance Matrix API to gather the necessary data and insight to help them make the best decision possible for their organization.

The Microsoft subsidiary is expanding into Region X with a plan to renovate their buildings and facilities. Their RE&F team investigated available options in the real estate market to collocate all operations from multiple locations within the target region into a single location, but they are having a hard time deciding upon a location.

Various factors are being considered with one of the most critical being employee commute time. The RE&F team wants to make sure that they factor in how much time each employee spends commuting via public transportation or vehicle and identify a site that would be most easily accessible (for all the employees). A commute study was needed to investigate how employees could decrease their average commuting time. Yet given the large number of the employees and candidate sites, analyzing the various combinations of commute scenarios was a challenge.

The study outlined below illustrates how the RE&F team met the challenge and analyzed commute times, taking into consideration the multiple current office locations situated in different areas of Region X versus the potential future office locations.

The Bing Maps Distance Matrix API proved to be the perfect tool for RE&F team’s commute study. They first needed to understand where within Region X their employees are living. After running some HR reports, the RE&F team discovered that a large portion of the employees reside in cities outside of Region X. Additionally, each employee completed an anonymous survey collecting details about the street name and street number of their residence in addition to the site where they work.

The results were then analyzed with and mapped on the site locations, with the goal of finding the best location based on ease of access. An example table of the average commute time delta comparing all candidate sites is illustrated below:

Table 1. Average employee commute time to each site vs. average of all sites 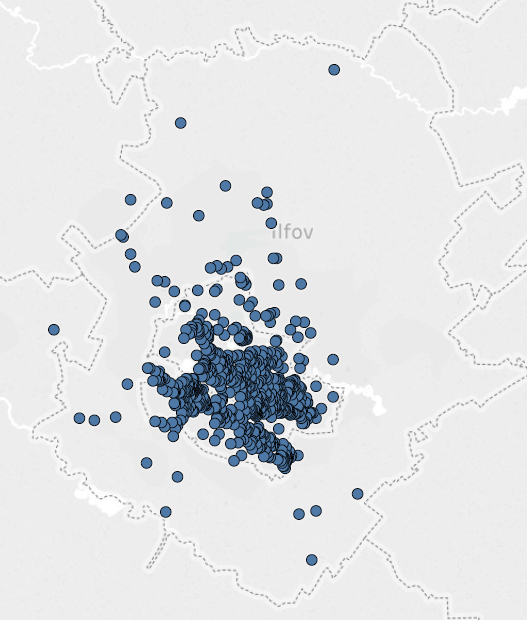 The table above demonstrates a simplified approach to solving the problem by comparing average commute times. In that instance Site# 1 would be the best location because it has the shortest average commute time. However, the RE&F team went a step further and took the impact of employee distribution into account, by analyzing and modeling each employee’s commute time. Bing Maps Distance Matrix API powered the calculations based on road data, commute routes, and real-time traffic data.

After that, the RE&F team broke down the potential impact of each new site on commute time into three levels, with respect to each employee’s current office location:

1. New commute time that would be shorter due to potential relocation [This is a benefit]

2. New commute time that would increase but by less than 30 minutes [This has a mild negative impact]

3. New commute time that would increase by more than 30 minutes [This is a high-risk choice]

The table below summarizes the percentage of affected employees in each of the three impact levels.

In the driving case, take Table 2 as an example, candidate Site# 2 would be the overall winner in terms of positive impact: the highest percentage (70%) of employees will benefit from a shorter commute. That said, all candidate sites are fair choices with mild increases in commute time of less than 30 minutes. Only 0% – 2% of employees will see more than a 30-minute commute time increase.

As illustrated in the examples of the analysis above, the Bing Maps Distance Matrix API ultimately helped the RE&F team make the best decision in selecting a future office site with a quick and big positive impact on the overall results.

To get more information, data, and examples of the Distance Matrix API in action, see the documentation and visit www.microsoft.com/maps.

For any questions about other Bing Maps API use cases, contact the Bing Maps team at bmesupp@microsoft.com.

This site uses Akismet to reduce spam. Learn how your comment data is processed.